The South Atlantic is generally not thought of by meteorologists as a place where tropical cyclones can form. The water temperatures are generally too cool and the vertical wind shear too strong. The area is so devoid of tropical storm activity that no government agency has an official warning system for storms there...

Nevertheless, southern Brazil and the Río de la Plata region have experienced a number of extremely strong wind storms in these years since (what later became known as) “Hurricane Catarina” hit southern Brazil in 2004.

The “cyclone” depicted in the following image hit in late July during FEBU’s block class. 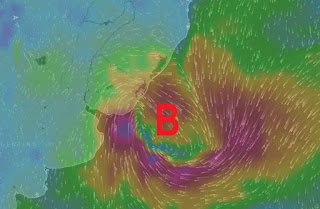 And the storm that hit Uruguay this past Tuesday (Sep13) certainly caused a stir! Comments with the image (on the MetSul fb page) also point out the snow-capped Andes to the west and smoke from fires in the Amazon further north (at the top of the picture). 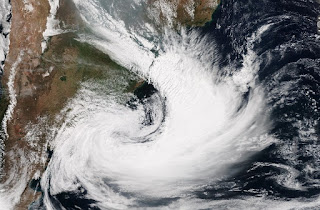 The storm was called a “meteorological bomb” and a “super cyclone” by MetSul Meteorologia. 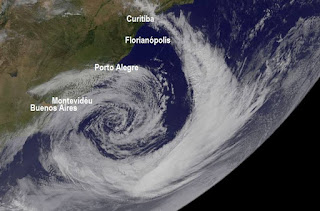 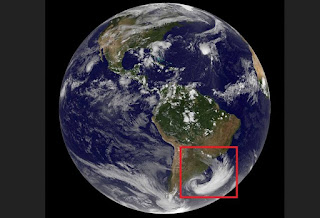 These images (from GOES) highlight the cyclone’s impressive size.
Posted by Deborah at 8:29 PM