Here’s what everyone needs to know:

If Messi plays tonight, it will be the two friends and Barcelona forwards (incidentally, two of the best soccer players on the planet) Lionel Messi (Argentina) and Luis Suárez (Uruguay) facing each other. Suárez will play next to Edinson Cavani, backed up by Diego Godín, both of them also among the best in the world. 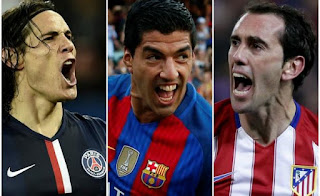 Argentina has been second for the last three international competitions (two Copa Americas and one World Cup). Before that, they lost the 2011 Copa America (held in Argentina) to their rival across the river (that would be Uruguay). Messi has never won an international competition playing for Argentina. After the last Copa America he left the team. But he came back. The game tonight is part of the qualifiers for the 2018 World Cup.

And that’s what’s going on tonight in this part of the world.
Posted by Deborah at 4:30 PM