The past two years have been intense on many levels for our family: Full of lessons of all kinds... For me... Lessons that were difficult and unsought... Moments that stand out, especially as seen through the lens not only of a mom but also of an educator... And as I look back, noting how much both E and DJ have learned and grown and profited, I am thankful (once again and more than ever) for our Loving Shepherd and His guiding – even down paths we would not have chosen then...

He always leads in righteous paths – for His own name’s sake! (What awesome truth!)

And anecdotes like the following are hugs for my soul:

In mid-September, inspired by E’s friend who spent the day with us, DJ spoke Spanish here at home almost all day. At one point, when told to wear a jacket to play outside, he asked:

I had to stop and process what he’d just said. (Huh?!)

Then I realized: That’s how you say “Lightning McQueen” in Spanish!

And I’m the one who first spoke Spanish to my two – and even before their births – but now I’ve gotta catch up with ‘em... 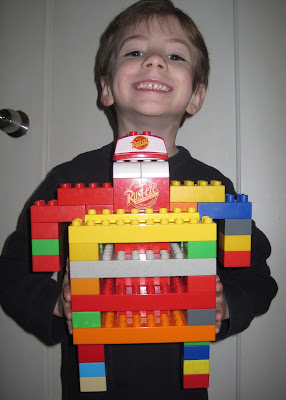 This boy still loves his blocks!

At the end of September, we were spending the afternoon with friends in northern Montevideo. DJ, who was drawing, held up his picture and asked:

A truly “native” idiom that requires an equally idiomatic translation! He was inadvertently proving how much he truly thinks in Spanish! 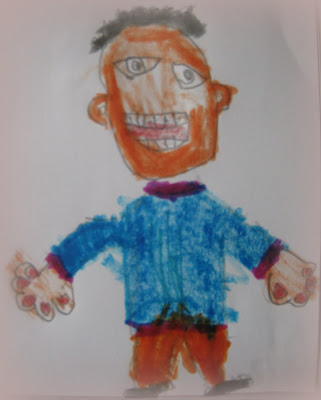 In other (related) news... Several weeks of volunteering, teaching English at DJ’s kindergarten, came to a close on Thursday of last week. DJ was very proud to have me at his school. And I’m thankful for several especially good opportunities to witness of the eternal hope that is found in Christ. Another personal highlight was getting an in-depth evaluation of DJ’s academic progress from his teachers’ perspective. Suffice it to say that I’m very, very, very thankful!

On January 11 of this year, I’d written:

Awhile has passed since I last posted “funnies” from DJ. His being overwhelmed with the whole schooling challenge seems to have temporarily influenced even his communication at home. But, thankfully, his eager participation in “artistic expression” as he prepared for and then participated in his end-of-the-year program made him “turn a corner” in his communication overall.

We’re thankful for the gift the administration of the pre-school has been to our family this past academic year and especially for the directors’ insight and how their hope (that DJ’s participation in so many roles would act as a catalyst for verbal communication) paid off! Since December, DJ has constantly surprised us with his expressiveness in both English and Spanish! 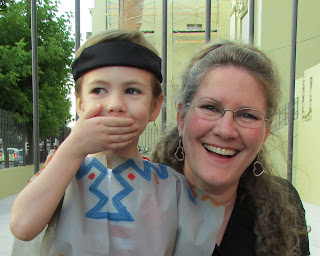 (And on August 9 and 10 he started speaking Spanish at school – and hasn’t stopped at all since then!)

And here are some language “funnies” that I jotted to myself in email but did not get to include in blog posts.

On March 11 of this year DJ asked: “Is hair a kind of plant that grows on your body?”

Those comments came from a boy that still doesn’t enjoy either haircuts or getting his hair shampooed! 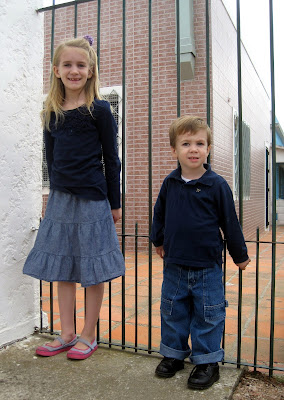 They were so little back then!

While JM was away, counseling at  camp that summer, we other three had the following conversation:

I: Well, mosquito bites are a fact of life right now; you’ll just have to ignore them.

I: Good! That means you’re not going to scratch them.

DJM: (chuckling, after that very key short pause when he’s processing the information) I’m not /ignohwing/ mine /mohwquito/ bites!

He understood my explanation! (Hee! Hee!)
Posted by Deborah at 11:55 PM